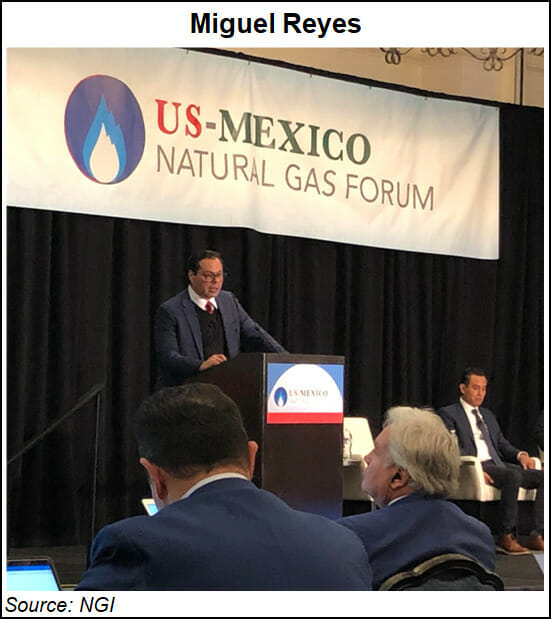 Senior Mexican officials were in Texas this week to present their new natural gas strategy.

CFEnergía is the international marketing arm of CFE.

“We work together through partnerships and under Mexican law to take advantage of excess natural gas capacity,” Reyes told the audience. It was the first time Team CFE had taken part in the event in four years, and came amid a trade dispute between the United States, Canada and Mexico centered on energy.

“We started working on the points and the objectives that we have in common and put the contract disputes behind us,” Robles said. He was referring to a dispute over gas pipeline contracts signed under the previous administration. The CFE had deemed these contracts unfair for the state firm.

The executive of the Canada-based pipeline conglomerate said the most important aspect of the partnership was CFE’s ability to help solve social problems and secure permits. This contributed, for example, to the rerouting of a disputed segment of the Tuxpan-Tula pipeline, Robles said.

Robles said he sees this project complete construction by the end of 2024, with commercial start-up in early 2025. “We are putting aside our differences to work through the issues,” he said.

“I feel like I live with the CFE team”

Sempra’s Eekhout said “we are joining forces with CFE”. He said that with the help of CFE, talks resumed with the Yaqui community over differences over the blocked Guaymas-El Oro pipeline.

CFE would also anchor Sempra’s planned Vista Pacífico LNG export project in the state of Sonora. “We’ve been working together on Vista Pacifico for two years,” Eekhout said. “This would help CFE to optimize its pipeline networks. There is excess capacity in this area.

Eekhout suggested that a final investment decision on Vista Pacifico could come as early as next year. This would be in addition to the first phase of the Energía Costa Azul liquefaction plant, which is under construction in Baja California.

Meanwhile, NFE’s Guinta said he was constantly in Mexico working out the details of their partnership. “I feel like I live with the CFE team,” he said.

NFE plans to set up two offshore “fast LNG” export projects by the end of next year. Each would have a capacity to emit 1.4 million tonnes/year of LNG. These projects would be offshore near the port of Altamira. CFE helped with permits, labor and other issues. In return, NFE would share the profits with CFE.

The project would tap into Texas-Tuxpan’s subsea Sur pipeline, and the gas would be liquefied over prefabricated modules on a floating platform. The gas would then be shipped to international markets on liquefied natural gas vessels.

“All of these deals are without capital for Mexico and Mexicans,” Guinta said. He added that the economic impact on CFE exceeds 4 billion dollars.

NFE is planning a third fast LNG unit, deployed at the Lakach offshore gas field. It aims to have the unit operational before the end of the Andrés Manuel López Obrador administration, or the end of 2024.

Turning a “liability into an asset”

CFEnergía’s Reyes criticized the energy reform of the previous administration. He said it was done in a hurry and “did CFE no favors”.

This placed a burden on the CFE, Reyes said. “CFE contracts all the gas and anchors all the pipelines. We are talking about a market where there is no market.

He said CFE’s new business model was an example of how to turn “a liability into an asset”. It would focus on increasing capacity utilization on CFE’s pipelines.

Fifteen CFE power plants are to be built across Mexico with a capacity of 7.4 GW. All could use natural gas. Reyes said CFE would also secure access to natural gas for fertilizer plants, to help with food security. Finally, the company is planning an additional LNG export plant, on the east coast, in Coatzacoalcos, in the south of Veracruz. He invited parties interested in the event to participate in an upcoming tender, which is currently being planned.

With this strategy, CFE could increase the use of its natural gas transport capacity by 13% in the United States and 18% in Mexico, Reyes added.