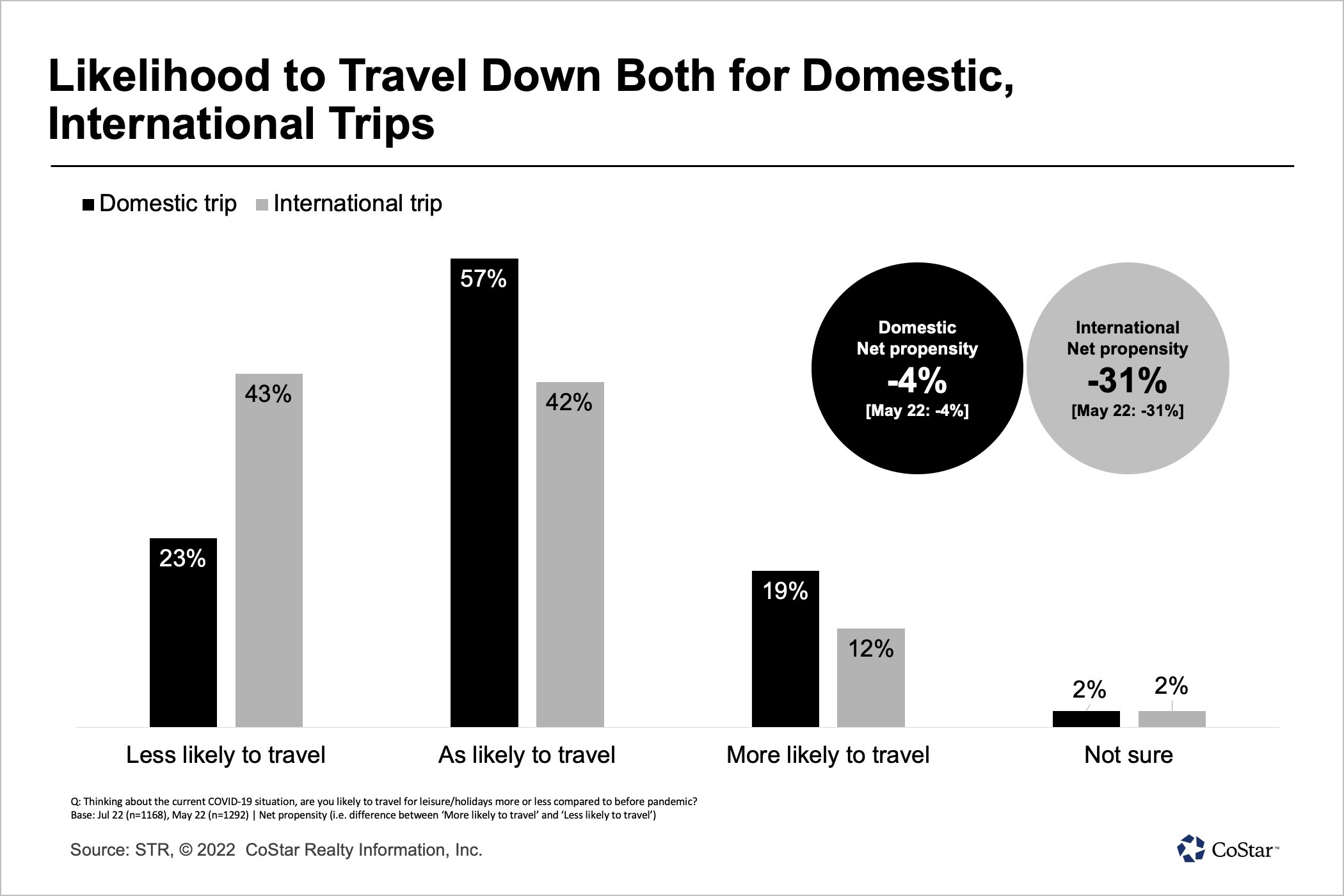 So far, for much of the year, hoteliers have benefited from the release of pent-up demand and the easing of COVID-19 concerns. However, as the Northern Hemisphere industry transitions from the peak summer months to the mid-fall periods, new challenges accompany seasonal declines in demand that threaten growth.

Concerns about the rising cost of living as inflation hits record highs in many countries and worries about travel disruptions linked to staffing issues are affecting the industry.

The July 2022 consumer research from STR, the hotel analytics division of CoStar, sheds light on attitudes towards these and other issues currently influencing travel. The results reveal a mixed outlook as the appetite for travel remains strong in the face of mounting headwinds.

Attitudes toward COVID-19 have improved These last months. However, ongoing concerns related to COVID-19 as well as other factors, such as economic uncertainty and flight cancellations, continue to hurt overall travel appeal today.

Based on the current situation, the net propensity to travel, a measure of the likelihood of traveling compared to before the pandemic, remained in negative territory for both domestic (-4%) and international (-31%) travel. These scores were identical to those of May 2022, which blocked an improving trend in sentiment recorded in previous surveys.

The results suggest that new factors are currently discouraging travel despite strong underlying travel demand. Meanwhile, a much stronger long-term outlook was evident, with the net propensity to travel in the future increasing by around 30% for both domestic and international travel.

Worries about rising travel costs and household costs – which were ranked the number one and number three barriers to travel, respectively – are major issues facing consumers. The latter being a particularly important concern among the British, it was mentioned by nearly 60% compared to around 40% among North Americans and Europeans.

Concerns about travel disruptions rose to become the second most important obstacle in July after being ranked fourth in May. These concerns stood out the most among North Americans, with 61% believing it would have a negative impact on travel, compared to only around 50% among Britons and Europeans.

These issues and other financial considerations such as personal financial situation and uncertainty about the future economic situation were mentioned more regularly in July than in the previous survey in May. These findings highlight consumers’ increased awareness of financial factors that may influence their travel plans. But how likely are these concerns to change consumer travel spending in the future?

While financial barriers have risen to prominence in recent months, there is little evidence at this stage to suggest that financial concerns are suppressing travel demand.

More than 70% said they are likely to spend the same or more on travel over the next 12 months, despite rising costs and economic uncertainty.

The average level of agreement with the statement presented was 3.25, which implies an overall neutral view rather than a negative view. This reveals an interesting dichotomy between consumer attitudes towards travel. On the one hand, consumers are increasingly financially savvy and watching costs in the current situation, while on the other hand, many have the financial means and the deep desire to travel, which overrides these concerns.

Perhaps a reflection of more pronounced cost-of-living concerns, Britons seem more likely than others to potentially limit their travel spending. Almost 45% thought they were likely to do so in the next 12 months, compared to around 40% of Europeans and North Americans.

Reassuringly, research shows that despite mounting financial challenges, many consumers remain optimistic about travel in the future. Most expect to spend the same or more than they currently do on travel over the next 12 months, which bodes well for the industry’s continued recovery.

However, inflationary pressures are driving up costs in most parts of the world. This means that consumer spending on travel must keep pace with inflation for businesses to continue reaping the same benefits. Improving labor and other supply chain challenges will help reduce inflationary pressures. This can be crucial to allow growth for the rest of the year, as seasonality causes demand to naturally slow down.

Sean Morgan is Director of Product and Insights Analytics for STR, the hospitality analytics division of the CoStar Group.

This article represents an interpretation of data collected by STR, parent company of HNN. Feel free to contact an editor with any questions or concerns. For more analysis of STR data, visit the data analysis blog at STR.com.

Back to Hotel News Now homepage.