Coinciding with the start of trading this week, forex traders noticed an upward bounce in the price of the Euro currency pair against the US Dollar, EUR/USD.

This came with gains at the 1.0688 resistance level, gains rebounding from their five-year low, and the Euro’s gains came against the rest of the other major currencies. This follows comments by European Central Bank President Christine Lagarde, who indicated that the bank plans to break out of negative territory this year.

The progression is more visible against the US dollar. The US currency has appreciated against the euro over the past 12 months, with the exchange rate falling from 1.22 last May to 1.04 two weeks ago. But has the message from the ECB changed the rules of the game? Has EUR/USD bottomed, or should investors dampen this rally?

Overall, the descending wedge pattern indicates more upside. The strong gains in the US dollar came with the impetus of the US Federal Reserve’s shift to hawkish policy. The Fed has raised rates aggressively and plans to continue to tighten financial conditions. However, it can be very good if everything is already priced.

Lagarde hinted in his remarks that the European Central Bank plans to exit the negative rate zone. The European Central Bank has kept the deposit facility rate below zero for many years. It has also implemented quantitative easing programs designed to deal with European economies during economic downturns. But the ECB’s mandate involves price stability. With inflation circling well around the ECB’s target, it is extremely dangerous to ignore it despite the war in Ukraine and the obstacles it poses to European economies.

In her comments yesterday, Christine Lagarde committed to a 25 basis point rate hike in July, followed by another similar hike in September. But perhaps more importantly, she didn’t commit to anything after September. As a result, the Euro rose based on the message from the ECB. Until September, traders will have plenty of time to interpret future guidance that the central bank will provide over the summer.

After the euro’s gains, it may now attempt to rally further if the US dollar continues to strengthen and the RMB stays on a stronger footing, although many analysts are concerned about the eurozone economic numbers. which should be released this week. Europe’s single currency, the euro, has benefited in recent trades from falling US bond yields, a falling US dollar, a strong rebound in the renminbi and a growing chorus of hawkish Bank policymakers. European Central Bank (ECB) whose remarks pushed eurozone bond yields higher. significantly.

Members of the Governing Council are increasingly unanimous in suggesting that the European Central Bank could start raising the negative deposit rate for the first time since 2011 in the near future and possibly as early as July to help curb the inflation in the euro area. President Christine Lagarde reportedly repeated that message on Dutch television over the weekend as she echoed sentiments she expressed at the Bank of Slovenia conference on May 11 in another yield-friendly result. euro zone government bonds. Commenting on this, Jordan Rochester, analyst at Nomura Bank, said: “Over the past week, weaker US survey data has pushed the dollar lower, and the 50 basis point suspension of the Central Bank node market pushed EUR/USD higher.”

This week, it is the turn of European growth opinion surveys to move prices, with the German Ifo index, the PMI and consumer confidence surveys for the month of May. The analyst suggests that Nomura’s clients continue to bet that EUR/USD will fall again.

Recent comments from European Central Bank officials prompted financial markets to hike the bank’s interest rate outright in July and are also betting with growing confidence that it will likely follow with a series of interest rate hikes. more before the end of the year. This is explained by the decline in US bond yields and the weakness of the US currency, which has been very favorable to the euro against the dollar in recent transactions.

According to the pair’s technical analysis: I still expect EUR/USD’s recent rebound gains to be temporary and for rapidly evaporating factors, as the July date is still a long way off. We see that Lagarde has confirmed from his statements that he is easing sell trades on the euro, especially since the Russian-Ukrainian war is still ongoing and the future of energy to Europe is becoming more uncertain better Sell ​​the EURUSD from the resistance levels of 1.0690 and 1.0775, respectively.

On the downside, the support level of 1.0500 remains the most important for the bears to get in the way of the stronger and clearer channel on the daily chart below. The Euro will interact today with the announcement of Industrial and Services Purchasing Managers’ Index readings for Eurozone economies and statements from Lagarde, and the Dollar will be affected by further statements from the Governor. American central Jerome Powell. 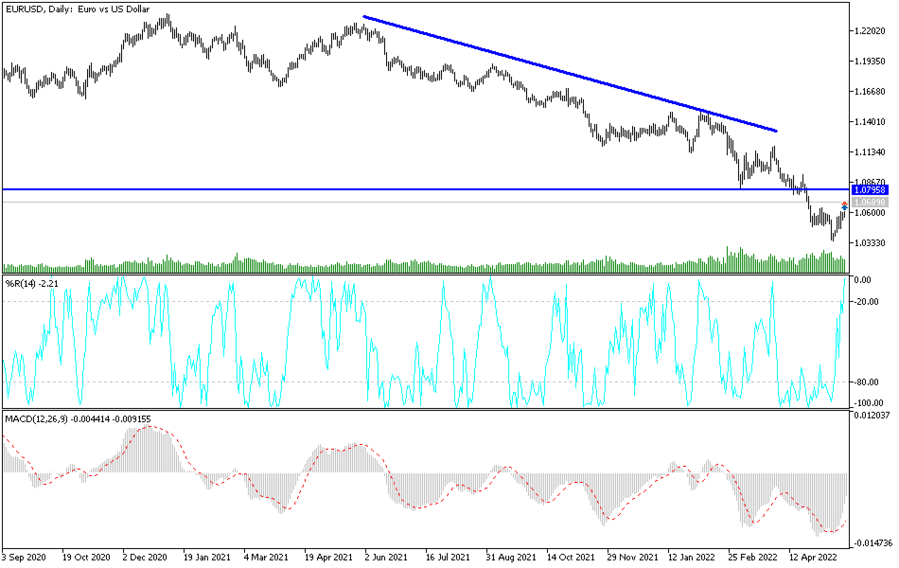