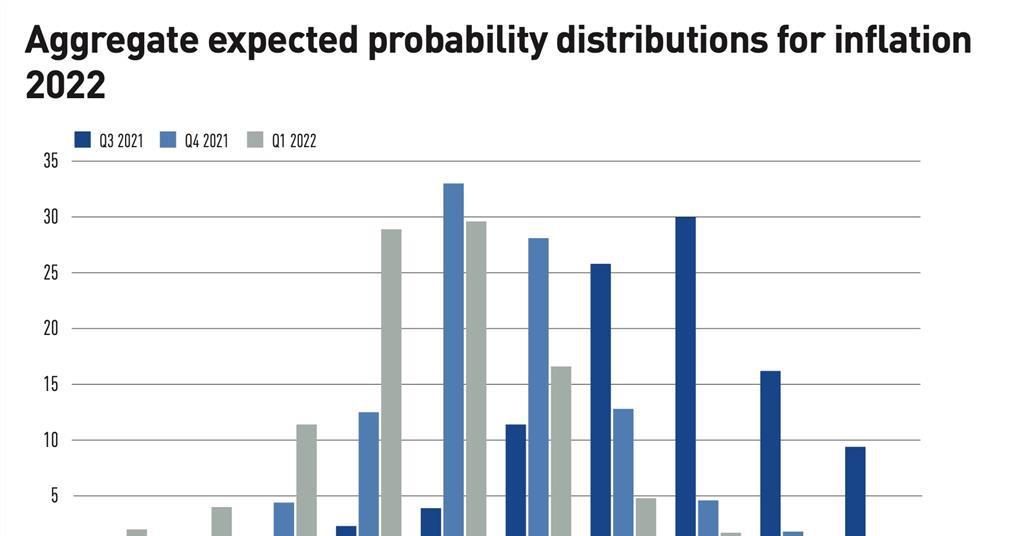 Not often far from the action, central banks have taken center stage in 2022 as one after another in developed markets reveals their hawkish intentions. The speed and synchronicity with which they have moved has been quite remarkable, with only the Bank of Japan yet to join the other major central banks.

There is no denying that inflation has risen sharply, with Europe’s measure of inflation, the Harmonized Index of Consumer Prices (HICP), reaching a record high for the region of 5.1%. The European Central Bank’s quarterly survey of professional forecasters also highlighted the very sharp rise in inflation expectations for 2022 (see chart), with ECB President Christine Lagarde referring to “universal concern about inflation data.

The threat of rising prices triggering a wage spiral will be troubling to policymakers around the world. Although the rise in employment reported in the January US jobs report took markets by surprise, the 0.7% rise in average hourly earnings was perhaps the most influential number.

For now, the consensus seems to be that longer-term inflation expectations are still well anchored and that the current surge in prices and wages will plateau.

For China, the Winter Olympics are unlikely to provide a boost to the economy and could instead be negative given China’s strict COVID measures. Recent figures point to a slowdown in economic activity in the first quarter of 2022, and any central bank action is therefore likely to be put on hold for the time being.

Is the United States headed for an inversion of the yield curve?

As central banks have tightened monetary policies, yield curves have flattened, sometimes quite dramatically. This sparked a lot of talk about the possibility that the US curve is about to reverse.

Historically, an inverted US yield curve has provided a reliable recession warning, with few false signals. However, quantitative easing and huge central bank balance sheets have meant that using the crystal ball of yield curve inversion may be less effective today.

In the past, the inversion of the curve preceded the onset of recession by one or two years, well before, for example, credit spreads or stock market returns. It is therefore a good alarm signal while other indicators are still pointing to above-trend growth.

Yield curves started to flatten before the Fed began its tightening cycle, and that was certainly what was seen a few years ago in 2017-18, when longer rates anticipated the upcoming policy change. This time however, the flattening was even more dramatic and faster, causing investors to pause and wonder why.

There are two fairly obvious reasons why long-term interest rates arguably remain lower than they should be. The first is the Fed’s balance sheet and the direct correlation between the size of its Treasury holdings and the downward pressure on interest rates.

Another important factor is the continued demand for longer-dated securities to support pension funds in their liability-focused investing efforts.

Although we are close to the reversal, there is still some way to go.

An inverted curve implies that the policy is too strict and a hard landing is likely. But with rates yet to be raised and still close to zero, today’s flat yield curves may need to be even flatter and the level of shorter rates may hold more information than before quantitative easing.

The global stock of negative yielding fixed income assets has been declining for some time. In February, even the 10-year Bund yield moved into positive territory, after the ECB revealed its more hawkish stance.

The market has turned to the price of a cumulative 50 basis point increase in ECB rate hikes this year, and it is likely that the revaluation is not yet done.

Peripheral spreads, which the US Federal Reserve need not worry about, have also widened significantly. The less robust fundamentals of southern European bond markets are coming under greater scrutiny as ECB policy tightens, liquidity deteriorates and funding costs rise.

Perhaps it is too pessimistic to fear the onset of a new European debt crisis. A more optimistic view might be that north-south transfers from the EU’s recovery plan, NextGenerationEU, will provide welcome support. Economic growth is expected to be strong this year and into 2023, which may also provide protection against widening peripheral spreads.

For bond markets in general, investors will largely focus on whether U.S. wage growth is close to a peak or if there is a danger that it will persist or even worsen. . The latter would prompt the Fed to tighten policy even further, risking a significant economic slowdown and potentially causing a lot of upheaval in financial markets.

In early February, the Bank of England‘s Monetary Policy Committee (MPC) announced its reasonably forecast hike of 25 basis points to 0.5%, the second hike in three months. It was then revealed that four of the nine MPC members had voted for a 50 basis point raise, a hawkish revelation that surprised many.

While policy rates are likely to rise faster than expected, the BoE governor has emphasized “modest tightening” over the next few months, continuing to push back on more hawkish market expectations in the medium term. term.

This acceleration in interest rate hikes could provide short-term support for the pound, especially against other G10 economies whose central banks are pricing in a slower rate path. However, the outlook for the UK remains bleak, with the BoE lowering its forecast for the pound due to higher expected rates as well as the severe income squeeze facing UK consumers.

“The outlook for the UK remains bleak, with the BoE lowering its forecast for the pound due to higher expected rates as well as the severe income squeeze facing the UK consumer”

The exceptional qualities of the US dollar could be diminished as interest rates rise around the world. However, some forecasters believe it is too early to call the summit, arguing that although its summit is indeed closer, it has not been reached.

US payrolls data indicate that the economy is showing considerable strength and is much closer to closing the output gap than other economies. US Dollar bulls say the Fed will have to tighten more than what is currently expected in the market. They also argue that the Fed is more likely and able to be more aggressive than the ECB, which needs to be more cautious given previous bouts of tightening and the potentially damaging impact on peripheral bond markets.

Where there is perhaps more agreement is that a world in which global financial conditions tighten will likely lead to greater volatility in currency markets and greater emphasis on currency vulnerabilities. at high beta.