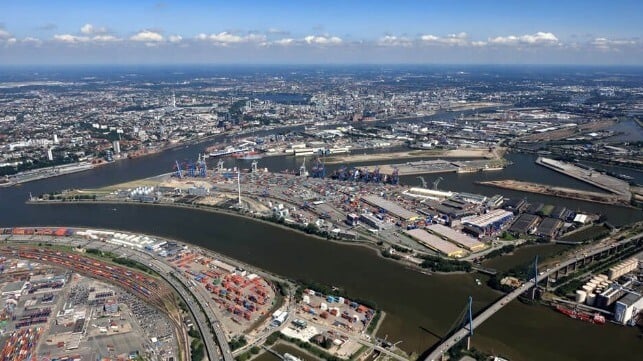 The Port of Hamburg and several of its major operators have developed a new way to manage port congestion and backlogs as well as emissions resulting from container transshipment in the vast port complex. From November 1, a project will be launched with Unifeeder, which calls Hamburg its biggest transshipment hub, using the line’s ships to move containers instead of trucking containers on routes between terminals.

In 2021, Hamburg handled nearly 9 million TEUs, which, although down slightly from 2020, still puts the port in 20th place in the world port rankings. Last year there were more than 3,500 container ship calls at the port, including more than 200 by ultra-large vessels carrying at least 18,000 TEUs. A key destination, especially on Asian shipping routes, Hamburg is also one of the main transhipment ports in Northern Europe. Port officials point out that in total the Port of Hamburg recorded around 3.3 million TEUs of transshipments in 2021. Although not all of them are transferred between terminals, they report that a large number of Containers are moved by truck every day between the main terminals at different locations around the port.

“Transshipments by ship can remove several thousand containers from the road every year. Every container we can move by waterway means a reduction in C02,” said Alexander Geisler, Managing Director of DIHLA DAKOSY Interessengemeinschaft Hamburger Linienagenten (DIHLA), one of the companies helping to initiate the sea transfers. The Danish shipping company Unifeeder is the initiator, together with the Hamburg software specialist DAKOSY and DIHLA, which participated in the creation of a digital process that also covers customs handling for transshipping containers in the port by ship. They designed a new electronic transhipment manifest establishing the framework for digital processes and customs handling of feeder transhipments.

Unifeeder points out that it has up to 85 calls to the terminal per week with its current operation giving it the capacity to facilitate these transfers. The service will provide container transfers by feeder ship between the HHLA CTA, CTT and CTB terminals, as well as Eurogate and, in the near future, the Süd-West terminal. During a three-month trial, they reported that they were already able to move around 50 containers per month. In the longer term, Unifeeder is working to shift 50% of its transshipment operations from trucks to carriers.

According to port officials, the anticipated benefits include relieving port infrastructure by reducing the number of truck trips between terminals, shorter waiting times at terminals and an associated decrease in CO2 emissions. Like many ports, Hamburg has reported a shortage of skilled truck drivers, which they hope transhipments from feeder ships will also help to alleviate.

“We have been feeling the effects of the decline in the number of young truck drivers for years,” said Florian Pein, regional director for Western and Central Europe at Unifeeder. “This is increasingly leading to a serious lack of transhipment resources and leading to long waiting times in the Port of Hamburg”,

The company sees great potential for moving large numbers of containers from road to waterway. The new integration model developed for the Port Community System is attracting greater interest from other feeder carriers, reports DAKOSY and, from November, will be available more widely for companies operating in the Port of Hamburg.