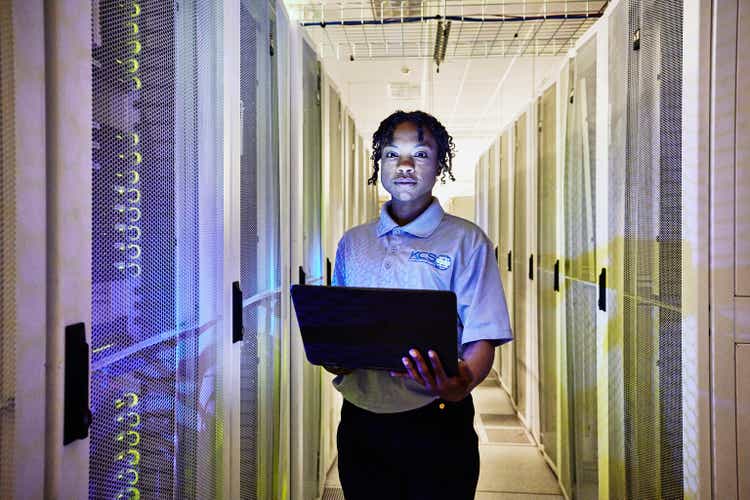 In my last article on the Invesco S&P 500 Equal Weight Technology ETF (NYSEARCA:RYT), I discussed the fair valuation of the fund given the quality of the principals. Since then, RYT has lost ~16% versus a loss of ~12% for the S&P 500 and underperformed the market. RYT has not been spared by the recent tech selloff and is now trading at ~18x earnings versus ~21x six months ago, leading many investors to wonder if now is a good time to buy. While I still think RYT offers a bargain compared to other tech funds that trade at much higher multiples, I think short-term performance could be disappointing given the shift in hawkish monetary policy. Liquidity was the main driver of the last tech bull market and any reversal in available liquidity is likely to negatively impact tech stock performance going forward.

Below I have compared the price performance of RYT against the Invesco QQQ ETF (QQQ) and the SPDR S&P 500 Trust ETF (SPY) over the past 6 months to determine which was the better investment. Since my previous article, RYT has lost 16% and has underperformed the market by a margin of around 4.3 percentage points. However, interestingly, RYT did better than the NASDAQ 100, especially on the last leg down.

The pullback in price hasn’t stopped investors from pouring more money into RYT, despite all the negative sentiment we’ve had in the market over the past few months. The fund has recorded a total of $45 million in net flows since early December 2021.

This matches what we’ve seen recently in the markets where investors bought the dips, driving record cumulative inflows into the tech. While this trend appeared to be reversing since late April 2022, I suspect market participants added even more funds to this sector during this week’s rally due to their fear of missing out.

Liquidity is crucial for tech stocks

In my previous article on RYT, I explained how this fund provides exposure to a basket of quality technology stocks. I also argued that RYT was fairly valued at around 20 times forward earnings, based on the portfolio earning an annual return on equity of 46%. Since then, valuations have fallen and RYT now trades at around 17.8 times earnings and has a price-to-book ratio of around 4.

While there is no doubt that RYT is now cheaper, the macro outlook has changed dramatically since December 2021, adjusting tech stock valuations in the process. Inflation and interest rates are now much higher than in December 2021, which means that many of these tech stocks are now discounted at a higher rate. It’s important to remember that liquidity was the main driver of the previous bull market, contributing to the strong performance of tech stocks. Due to rising interest rates and the end of quantitative easing, we have seen liquidity slowly shrink from the system since November 2021, putting further downward pressure on long-term assets. The question now is whether this trend will continue or whether the Fed will reverse its monetary tightening program. Personally, I don’t see the Fed pivoting over the next 2-3 months given high and sticky inflation.

Another threat to high multiples is the pace of monetary tightening. Financial conditions have tightened at the fastest pace in 10 years, putting particular pressure on unprofitable tech names that rely on equity issuance and debt financing to run their businesses. While we haven’t heard of any major examples yet, I think rollover risk is growing rapidly for many of these names.

This is reflected in the amount of distressed debt, which has reached its highest level since 2020. I don’t think RYT bears significant credit risk due to the quality of its constituents. However, I think there could be more downside pressure as the poor performance of other tech stocks could prove to be a drag on RYT’s returns. Overall, I think the wisest thing to do is to sit on the sidelines until we see a clear reversal in liquidity. This will allow investors to avoid a future downturn and preserve capital to accumulate at a lower price.

It is now obvious to everyone that central banks around the world are beginning to reverse quantitative easing and many have raised rates in recent months. Liquidity was a big driver of the last equity bull market and was particularly supportive for high-tech multi-stocks. As we now see a reversal in monetary policy, tech stocks are the category most vulnerable to this sudden shift. Inflation has now become a political issue, which makes me believe that the Fed is not going to pivot in the short term. For the above reasons, I think the wisest thing to do is to wait for the emergence of a clear catalyst that could lead to a change in the liquidity regime.