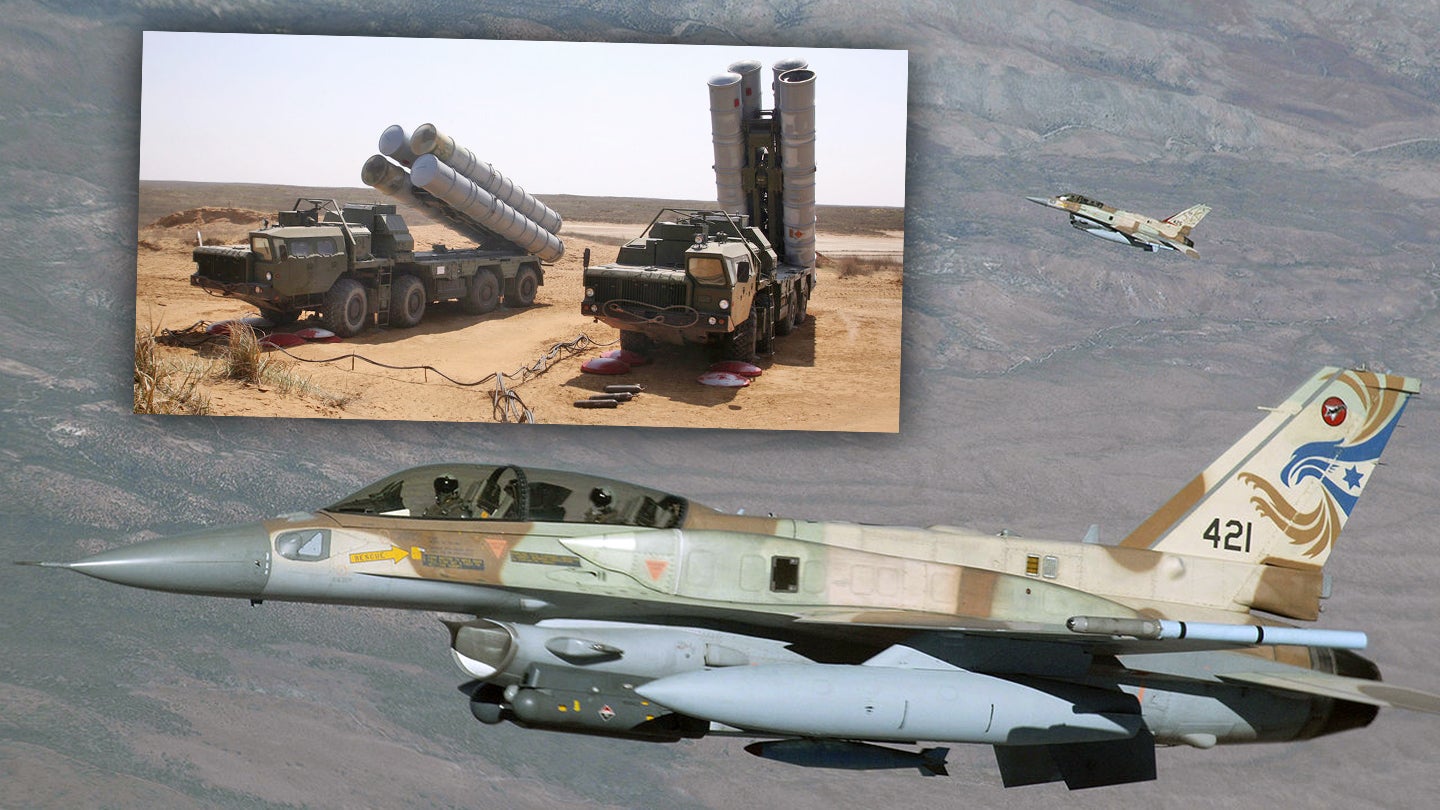 An S-300 battery in Syria reportedly fired at least one surface-to-air missile at Israeli Air Force F-16 fighter jets in recent days. The incident is the first apparent instance of a Russian-made S-300 firing at Israeli jets as they carry out raids in Syria since Moscow said it equipped the Assad regime with such air defense systems in 2018.

It is unclear who is operating the S-300 systems currently in Syria, regardless of their official status. It is known that Russia controls, or at least controlled, the release of missiles from the “Syrian” S-300 batteries in the country. As a result, neither these batteries nor Russia’s own S-400 and S-300 systems located at its Tartus naval base and Khmeimim air base near Latakia, have ever fired on incoming Israeli fighters, at least until ‘now.

Israeli Channel 13 reported on May 16 that “Russian” S-300 SAM batteries fired missiles at Israeli jets after hitting targets near the northwestern Syrian town of Masyaf last Friday. . However, the outlet’s story also describes the apparently Syrian S-300 systems as effectively Russian given Moscow’s direct control over their use.

As is standard practice, the Israel Defense Forces did not comment one way or another on the strikes. A statement from the Russian Defense Ministry’s Syria Reconciliation Center said Israeli F-16s fired 22 missiles targeting a “Syrian scientific research center” in the western Syrian town of Masyaf and the port of Baniyas on May 13.

In addition to targeting Iranian arms transfers destined for militants in Syria and Lebanon, as well as Iranian-backed arms factories and arms caches in Syria, the Israeli strikes in Syria last week were aimed at destroy entrances to underground facilities, the Jerusalem Post reported. At least some of the targets were hit by previous airstrikes in 2018, but have since been rebuilt.

As previously reported, it is not immediately clear whether the S-300 battery that allegedly fired at the Israeli planes officially belonged to Russian or Syrian forces, but in the past it had made no difference. No S-300 system in Syria has ever fired at IAF aircraft, although virtually all of the rest of Syria’s otherwise dated air defense system has. Since 2015, a deconfliction mechanism has been in place between Israeli and Russian forces regarding the former’s strikes in Syria. Isreal gives Russia advance notice of their missions and, until recently at least, Russian-controlled SAMs do not engage the fighters or their missiles. Tensions between Israel, Syria and Russia, however, led to questions about how long such an arrangement would last.

Additionally, although Channel 13 reported that the batteries of the S-300s were unleashed on the Israeli plane, the outlet said the missiles posed no threat to Israeli planes and that it did not there was no radar lock on the planes. It is not clear if the missiles were simply fired ballistically, which is not so uncommon for Syrian air defenders, or if Israel’s renowned electronic warfare systems made it impossible to lock down the jets with the S-300 system.

The timing of the firefight aligns with Israel’s shifting policy regarding Russia’s invasion of Ukraine. Israel has started supplying arms to Ukrainian forces in recent weeks after initially slowing its support for Ukraine’s fight against Russian invaders. Israeli officials also reportedly attended the summit hosted by the United States regarding military aid to Ukraine at Ramstein Air Base in Germany last month.

Since then, Israel has been caught up in some of the more bizarre instances of the war, such as when it condemned Russia’s stated aim of “denazifying” Ukraine. He later denounced Russian Foreign Minister Sergei Lavrov’s public claim that Adolf Hitler himself was of Jewish ancestry, a long-standing but completely unfounded conspiracy theory.

Russia first announced it would hand over an unknown number of S-300s to Syrian President Bashar Assad’s regime in 2018, following a bizarre incident in which Syrian air defenders accidentally shot down one Russian Il-20 Coot surveillance planes, killing all 15 Russians on board – after an Israeli airstrike against targets in the same vicinity along the Mediterranean coast as the recent attacks.

When announcing the transfer of missiles to Syria, Russian Defense Minister Sergei Shoigu said the S-300 system would have a maximum range of 124 miles, which is in line with the PMU-2 variant using the 48N6E3 missile, the most advanced export version of the system that Russia has produced.

Located in the southern part of Syria near the capital Damascus, this range allows the S-300 battery to reach the Mediterranean Sea and inside Israeli territory. It also covers Lebanese airspace, which the Israeli Air Force regularly transits before launching strikes inside Syria.

The Israeli jets have evaded recent defensive missile fire, but have not been without casualties in the numerous attacks inside Syria. An F-16 Sufa fighter crashed in early 2018 and other planes were damaged. Israel said the loss was due to pilot error.

S-300 systems are certainly threats to Israel’s ability to access Syrian airspace at all times, but the IAF has developed tactics and technologies to counter these systems, especially since they also entered service with rival Iran. These measures have included training in Greece, which operates variants of the S-300, and the United States, which has captured examples to train against, to hone their tactics and countermeasures. Israel is one of the world leaders in aerial electronic warfare.

Syria using Russian missiles, possibly under the command of Russian officers, to shoot down an Israeli F-16 would undoubtedly escalate the situation in Syria to new heights. But the shot at Israeli fighters via an S-300 system, if indeed it happened as reported, was probably more of a reminder to Israel that Russia can make their situation very favorable over Syrian skies a lot less if they wish. Given the tensions around Ukraine, such a signal should come as no surprise.