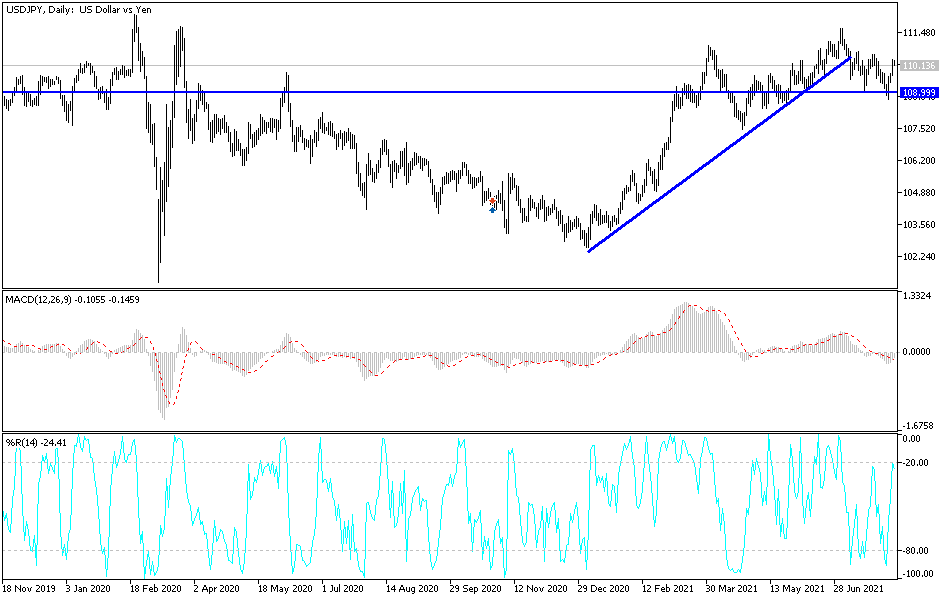 USD / JPY rallied sharply, more recently reaching the resistance level of 110.35. The bullish performance is supported by the abandonment of the Japanese yen by investors over concerns about the epidemiological situation in Japan, in addition to the positive economic releases in the United States led by the jobs report, which signals a possible increase. US interest rates. Overall, the US dollar found new auction interest in the wake of the strong US jobs report for July, although this strength was more pronounced against the euro.

The yen is a popular asset during times of turbulence.

Non-farm payrolls in the United States stood at 943K for the month of July, better than the 870K expected by the market and an improvement from 938K the previous month. In addition, the US unemployment rate is said to have fallen to 5.4% in July, beating analysts’ expectations for a drop to 5.7% from 5.9% in June. Therefore, the US dollar was bought off as a result of the data, as investors interpreted it as further confirmation that the US economy is growing in a manner consistent with the withdrawal of the Federal Reserve’s monetary stimulus. .

Commenting on this, Simon Harvey, senior currency analyst at Monex Europe, said: “The previous view of the US dollar market was confirmed by net job gains and an upward revision for June. For its part, the Fed has said for a long time that it will only start withdrawing its monetary support once it considers that the US economy has recovered sufficiently. Market developments – including the rally in the dollar – suggest that the Fed will be justified in announcing a plan to curtail QE asset purchases at upcoming meetings.

But before the US Federal Reserve offers more realistic guidance on higher interest rates, it is expected to scale back its quantitative easing program, and a series of strong jobs reports “raise the possibility of a reduction closer, ”according to Emma Samani, FX analyst at Monex Europe. “The data provides all the reasons dollar traders are bullish about the data. The dollar’s strength was also supported by the Treasury market, where 10-year bond yields rose about 1.3%.

Looking at the details of the jobs report, the employment rebound in July was again mainly driven by the leisure and hospitality sector. Employment in this sector increased by 380K in July. The number of jobs in trade and transport (47K), business services (60K) and education and health (87K) has also increased.

Technical analysis of the pair

On the downside, the currency pair will retreat to the bearish channel that has formed since trading began last month, if it comes back to test the support levels at 109.55 and 108.80 again.

The currency pair will continue to be affected by investor reaction to the US jobs data and investor risk appetite.