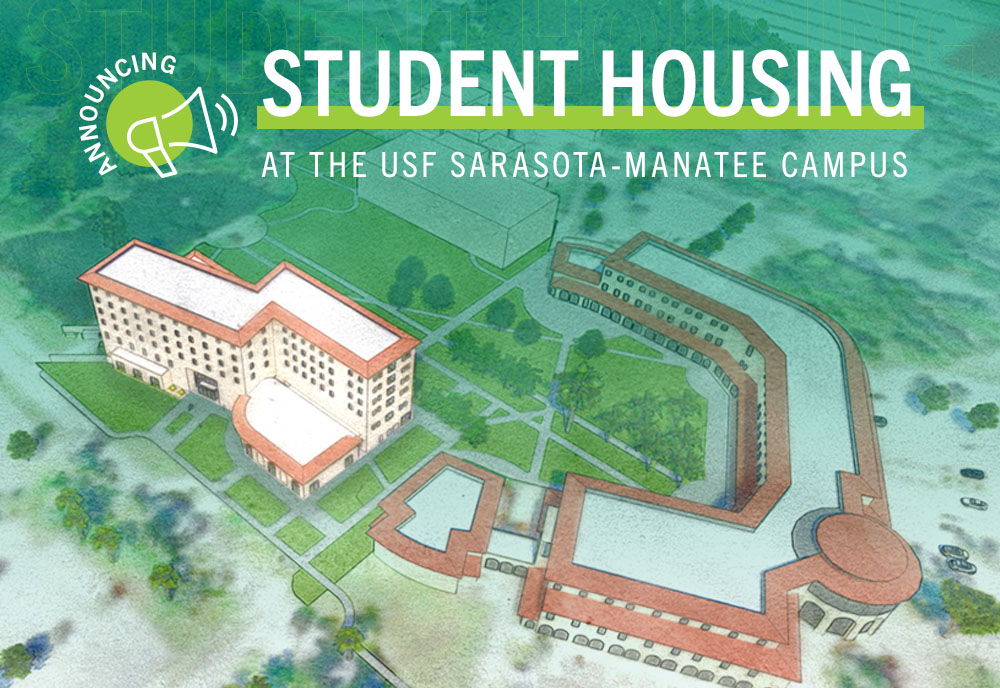 The Florida Board of Governors on Wednesday unanimously approved the construction of a housing and student center complex on the Sarasota-Manatee campus of the University of South Florida, advancing USF’s bold plans to to expand the campus and transform the university experience for students.

In the coming months, USF will open a 100,000 square foot multi-story housing/student center along Seagate Drive, just west of the iconic Crosley Campus Center. When the new complex opens in fall 2024, up to 200 students will be able to live on the USF Sarasota-Manatee campus for the first time.

“The new housing and student center is critical to supporting the growth of the University of South Florida’s Sarasota-Manatee campus,” said USF President Rhea Law. “This new project will allow the campus to strengthen the overall student experience while continuing to expand its academic program offerings in high-demand areas.”

The new building will consist of two parts. The student center, with 32,000 square feet on the ground floor, will include a new library and spaces for meals, lounges and meeting rooms. Student accommodation, 68,000 square feet on the upper floors, will include 70 double-occupancy and 60 single-occupancy rooms in one-bedroom, two-bedroom and four-bedroom apartment-style configurations, with bathrooms shared bathrooms, living areas and kitchens or kitchenettes.

Karen Holbrook, regional chancellor of the Sarasota-Manatee campus, says the new building will bring an added sense of vibrancy.

“Our students have told us often that they would love to live on campus and enjoy a traditional college experience. The new student center and residence will transform our beautiful campus and provide our students with new opportunities for success,” said Holbrook. . “This project has been in the works for several years, and I am grateful to President Law for helping bring it to fruition, and to the USF Board of Governors and Board of Trustees for their support.

Sarasota-Manatee Student Government Governor Evelyn De Oliveira said students are excited about the new complex. She predicts there will be a strong demand for the chance to live on campus.

“With on-campus housing, students will have the opportunity to interact more with each other and experience student life on campus instead of having to commute every day,” said said De Oliveira. “I think the demand is there even though we are a small campus. This will give students the opportunity to experience life for themselves, including international students who want to come to USF but would like the close-knit environment.

In a study updated last May, a USF consultant indicated that for many students, living on campus would be more affordable than many off-campus options in the Sarasota-Manatee area, one of the most expensive rentals of similar size in the country. This fall, more students than ever are living on USF campuses in Tampa and St. Petersburg.

The construction of the new building is expected to cost around $39 million. USF will provide $16.5 million, with the remaining funding coming from the sale of up to $30 million of bonds through USF Financing Corp. The bonds would be repaid with income from the USF housing system, as well as $200,000 a year in activities and services. fees collected at the Sarasota-Manatee campus.

The student center/housing complex represents half of expansion plans that promise to nearly triple the size of the Sarasota-Manatee campus and increase its appeal to students, faculty and the wider community.

Earlier this year, the Florida Legislature funded and Governor Ron DeSantis approved an initial appropriation of $3 million for a 75,000 square foot nursing/STEM building.

The new $62 million university building, currently in the planning and design phase, would double the size of the campus nursing program; increase the number of new majors in health disciplines and other programs; and fill the need for on-campus teaching and clinical laboratories and research facilities.

A planned fundraising campaign will generate part of the funding for the Nursing/STEM project. Additionally, a portion of the proceeds from the annual Brunch on the Bay on November 6 will be used to support the new building and university programs.

USF Sarasota-Manatee Campus Board Chairman Rick Piccolo said the projects demonstrate USF’s commitment to Sarasota-Manatee and growing the profile of the local campus in the region. Piccolo is also president of Sarasota Bradenton International Airport, which is across US 41 from campus.

“It has been exciting to watch what is happening on the Sarasota-Manatee campus through the hard work of the USF administration and others and to think about what the future holds for the school,” Piccolo said. “The entire community should be thrilled with the support we have received from the Governor, the local Legislative Delegation, the Board of Governors and other leaders, and USF’s plans to become an even more essential part of our wonderful community.”